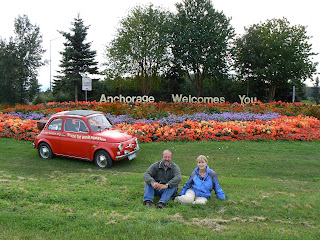 As our last report stated. WE HAVE MADE IT!!!!

We had a great drive from Tok, our last overnight stop, before arriving in
Anchorage mid-afternoon on Saturday 1st September, 99 days out of
Vladivostok.

The drive yielded more magnificent scenery, three glaciers reasonably
close up, the spectacular Matanuska Valley and many small lakes with the
last of the birdlife getting ready for their migration to the south.

Today is Labour Day here in North America, and it seems this is regarded
as the end of summer. A lot of shops and attractions close in the next few
weeks for the long winter period.

Anchorage is quite an expensive place and some of the motels we first
checkedt, didn't quite live up to the description in our travel book. We
luckily happened on a very nice apartment that had changed to winter rates
and we feel we are in a home away from home, and a far nicer way to end
the trip.

Now to the star of our trip, our Bambino.
The smallest car to ever go around the world.
The cutest car imaginable (actually voted the sexiest car ever, last year).
The car that has put a smile (or even an outright laugh) on so many
peoples' faces.
The car that has introduced us to so many wonderful people in so many
countries whether we had a common language or not.

We have had some other assistance on this trip. As a radiographer I have
had to upgrade my skills regularly as technology races along, but this
trip has seen quite a steep learning curve. Unlike many of our previous
trips we went hi tech this time. With us we had a lap top fitted with WiFi
, Skype phone and the ability to download onto a flash drive. We also had
an I Pod which we could plug into the car radio so we could both listen to
our downloaded music. Along with cameras and phones all this required a
huge bag of connections to keep everything fully charged.

Our greatest assistance though came from Penelope (she is of British
heritage). Lang calls her the best marriage guidance councilor of all
time. She remained unruffled while being abused, for she did have her
failings, but she had the ability to remain calm at all time and just tell
us she is recalculating or alternatively she could be turned off at the
press of a button. We have become very fond of our companion and I am not
the least bit jealous, I would strongly recommend a similar GPS to all
travelling couples.

I must admit home is beckoning, but we have a few administrative things to
attend to regarding the shipping of the Bambino back home and also
returning ourselves, hopefully by the end of the week.

The trip I guess is not complete until we drive the Fiat back into the
driveway at home, but that could be almost another two months. For Lang
and I though, psychologically we have cleared the final hurdle.

Einstein posed the question
"Is it a Friendly Universe?" and our trip has definitely enforced the
answer as ,YES.

He also said "All time is now" and I believe that is what travel is all
about. It takes you out of the everyday routine – the leaden weight of
routine, the fetters of habit, the cloak of cares and slavery of home. It
allows you to experience the here and now, whether that is the people or
the experiences of Siberia, Europe, or Northern America.

I have just finished reading "The Secret" by Australian author Rhonda
Byrne. What a powerful but very simple message it portrays. Something that
I have heard Lang express for the whole 39yrs we have been together –
always be positive, there is always a way to make things happen.

I travel not to go anywhere
But to go
I travel for travel's sake
The great affair is to move. 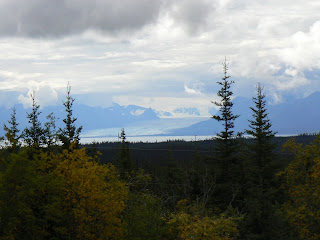 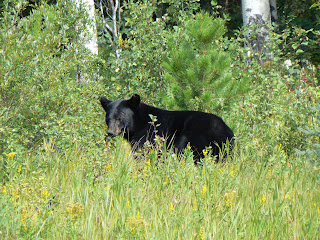 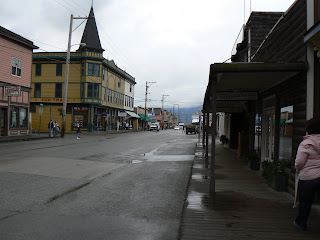 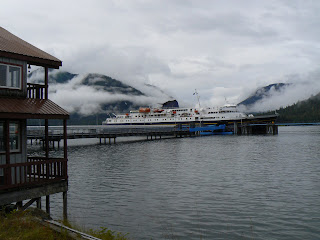 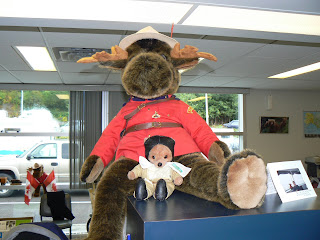 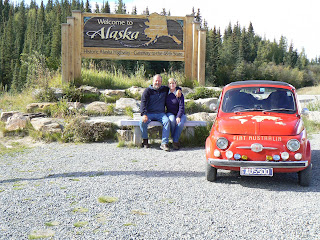 Our intention to continue up the standard route to Alaska was changed at
the last minute. We had previously tried to get a spot on the Alaska
Marine Highway ferry that runs from Prince Rupert to Skagway up the inland
waterway but were told it was booked out. I was quite disappointed, as was
Lang who was very keen to drive up the famous White Pass to Whitehorse. We
made a late night final call and got a spot!

Instead of heading north along the ALCAN Highway we headed over 800km west
to Prince Rupert on the Yellowhead Road through the mountains and lakes to
the sea and there boarded the MV Matanuska late on Tuesday night. We
tucked our Bambino into the hold for a well-earned rest and we adjourned
to our cabin on the next deck. Although we traveled due north and got no
closer to Anchorage, we disembarked after two very relaxing nights and one
full day, which made for a great birthday present for me.

It was a fabulous experience, on a truly beautiful waterway. The first
part of the trip was wet but it did fine up later in the day in time to
see a Humpback whale putting on a display especially for us. At each
fishing village stop you are allowed to disembark just for the time it
takes for the unloading and loading of the vehicles. Now, as it is the end
of the summer holiday period, the numbers are well down and I think there
were more crew than paying passengers.

An interesting happening was the refund of $169 at the ticket office. We
had been booked on in the "Smallest Car" category, which is 11 to 14 feet.
Everyone gets measured on boarding and, when they found we were only 9" 8"
long, they could not find a car category so concluded that we were a
"Motorcycle".

As well as being able to experience both the Alaskan Waterways and the
Alaskan Highway we did in particular want to visit Skagway and the White
Pass to learn more about the part it played in the 1897 Klondike goldrush.
As many as 50,000 people arrived at Skagway over the next two years and
then in unbelievably harsh conditions either treked over the Chilcot Pass
from Dyea or straight out of Skagway over the White Pass. Jack London said
the common name was "Dead Horse Pass" and graphic photos show piles of
some of the 3,000 horses worked to death carrying supplies up the frozen,
rock-strewn gorge.

Even though it is still summer now the weather is cold with lots of fog on
the mountains. It took three months in the dead of winter for those
stampeders to reach the Yukon goldfields inland near Whitehorse. In an
amazing engineering effort a single narrow gauge railway was later built
to connect the two towns and this is still used to take tourists for the
trip up the gorge.

The town of Skagway is maintained as a frontier town with wooden
boardwalks and all shops with old-fashioned facades. For nine months of
the year it is a cold tiny village. But for 3 months of summer it is a
full-on tourist town and during our visit there were four cruise ships in
the narrow fiord so, the long main street was crowded with hundreds of
tourists.

The scenery was fantastic and the little Fiat staggered up the slopes
trodden by thousands of hopefuls as we went up the Klondike Road and
linked back onto the Alaskan Highway. The snow capped mountains, the
forests, the lakes, the wildflowers and the wildlife just continues to
amaze. We had to slow for our fifth bear of the trip crossing the road in
front of us. While we were travelling through Northern British Columbia
and the Yukon we kept commenting how the forest area looked so much like
Siberia. This really surprises the local people in Canada but,looking at a
map, the two countries are not so far apart.

Soon after boarding the boat in Port Rupert we passed into Alaska and then
on the way up the White Pass we crossed back into Canada to spend another
two days travelling the Alaska Highway in the Yukon. Late today, just
before Tok we reentered Alaska, which had already been marked off, as our
16th American State. Crossing the border between USA and Canada involves
little more than a 30 second passing of the time of day with the
respective customs officers.

Some mention should be made of one of the greatest unsung engineering
feats of all time – the Alaska Canada (ALCAN) Highway. In 1942 the
American Army began construction (before the Canadian Parliament had
approved their presence) of a road as long as Seattle to San Diego or
Brisbane to Melbourne to get supplies to Alaska for the also forgotten war
against the Japanese in the Aleutian Island chain.

Starting from several points, 30,000 soldiers and 20,000 American and
Canadian civilians began carving a path through frozen swamps, forests and
lakes, over hundreds of rivers and several mountain ranges. At the rate of
8 miles a day the road was good enough in around three months for the
first trucks to start rolling. Photos of the troops staggering through
waist deep mud, bulldozers sinking and trucks being washed away – all in
sub-zero temperatures, remind one of the Egyptian slaves building the
pyramids! The road today is a fast, smooth sealed two lane affair but many
monuments along the way remind travelers of those forgotten heroes.

The Bambino has only one more day to go before we roll into Anchorage. For
the last few days we have been leaving oil behind us which, if the ground
is wet, creates quite a trail. Lang thinks he knows what seal is leaking
but at this stage it is easier to keep the oil filled rather than do a
major overhaul.