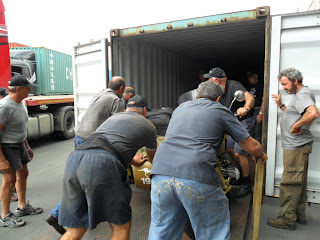 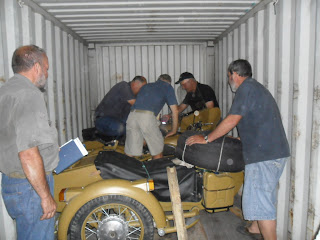 
Thank you to the riders who took photos shown in the trip blog.

Lee and Phil in particular spent a lot of effort on recording what they saw. Phil's collection can be seen in full on his site.
http://www.ratichon2605.blogspot.com/

The trip is well and truly over. Yesterday we tucked 15 bikes into two
forty foot containers which will be shipped to Brisbane and the additional
two bikes went into a 20 foot container to go to New Zealand.

We came into Genoa on Sunday and Lang was able to organise the shipping
first up on Monday. On Tuesday everyone scrubbed their bikes until they
gleamed, getting rid of 6 weeks of road grime and oil leaks. They were
then put into a warehouse on the dock overnight. It only took a few hours
yesterday with a lot of grunting and groaning and only millimeters to
spare to pack them into the containers and the shipping agent had a crew
on hand to do all the tie down, before the doors were shut and sealed.

As always the end of a trip brings very mixed emotions.

And, as usual, this project has given Lang and me challenges we could never
have planned for in advance. Lang as always has the capacity to just keep
his focus on solutions and shut out all the negatives enabling things to
keep moving forward. This does not always please a few people, pushed beyond their comfort zone, but in the end there is only ever one way - forward.

In any group we have ever been involved with there is the handful of people
who perform above and beyond expectation. We had that handful as usual on this trip and to these people we owe an enormous debt of gratitude.

Hub Jones really stood out as the person who was entirely dependable
and forever a calm problem solver. Even today several riders don't appreciate it was Hub's tireless efforts that kept them going. His work ethic and practical skills make
him a giant amongst his peers.

Lang and I will have some down time before our trip home staying with our
good friends Sandro and Wilmy in Garlenda Italy and then we have a few
days with John and Nui Salter in Thailand.

As with all our trips I like to remind people the reason we undertake such
things:

In the ten countries we travelled through on this trip we made
connections with local people that have left an incredible impact and
reasurred me that mankind is basically good and caring.

All time is now
It takes you out of the everyday routine
The leaden weight of routine
The fetters of habit
The cloak of cares and
Slavery of home
It allows you to experience the here and now.

We have all arrived in Genoa. That is all except Stuart Wood who in Poppi
decided to visit friends in Venice and catch up with us tomorrow.

The last few days have seen only minor problems with the bikes and all
arriving under their own steam. Lizzy Lada has had a few issues with her
carburettor but somehow manages to get me to my destination. She has done
extraordinary service hauling such a heavy load of spare parts during the
six week period.

Nadia has been riding with Sasha on his bike so I have done all but one
leg of the whole trip on my own. Early in the piece I did get plenty of
company at the end of a tow rope with hand signals our only form of
communication. It is a bit sad to say that I have formed a very special
bond with my very faithful GPS and get quite a feeling of well being
hearing her calm voice giving me directions.

From Poppi we had a camping night in Pisa, checked out the leaning tower
in this beautiful ancient walled city. We were going to stay two nights
but the consensus of opinion was to do the short hop to Levanto and see
the Cinque Terre. Many of us did the train trip between the five towns and
a few of us did the cliff face walk between the towns of this spectacular
UNESCO listed area.

Tonight we will have a finale dinner and then over the next few days
organise the shipping of the vehicles to our home ports. Most of the group
have arrangements to fly home later in the week.

We arrived in Ancona, Italy on the overnight ferry from Zadar in Croatia
sailing at 10.00pm and arriving at 7.00am on the 31st May.

At present we are at a camping site in Poppi on the Eastern side of
Florence. Here we are spending two days as we had two major break downs
yesterday.

We did some serious mountain climbing travelling from Urbino where we had
camped out side the beautiful walled city the previous night and here to
Poppi. Sasha's bike broke a bearing and Susan Horrobin seized the
universal joint on her bike. After towing Sasha a short distance we were
lucky enough to flag down a passing tow truck and ended up with the two
bikes arriving on the back of the truck at the camp site ready for the
repair work.

Here in Italy it is working out better to camp as the towns are so crowded
and this gives us plenty of space to work on the bikes and spread out a
bit.