Fwd: On the road


The first of many brake repairs at Mareeba. 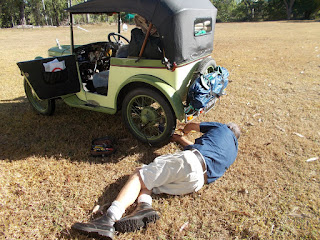 After some great hospitality, we set off from John Lenne's house in Cairns (where the ute and trailer are stored) on Thursday 26th June for all points north.

The little car, now christened "Daisy" by Bev, has been cruelly loaded despite all efforts to reduce the weight. Initially the engine sounded like a machine gun but it was discovered the timing was extremely advanced. With a bit of fiddling the distributor has been modified to use both its internal automatic advance and the original hand lever on the steering wheel and now is purring nicely.

The very steep 15km climb up the range from Cairns to Kuranda tested the little girl with a stop halfway to replenish the radiator. On arriving at Barry Dick and his partner Linda's place at Mareeba the left rear brake was removed after it was found dragging and frozen. It is amazing how much better a car goes without the brakes half on!

A nice night at Lakeland Downs pub was followed by an early morning run into Cooktown. Some seriously steep hills were now taken 'in it's stride" by Daisy using the increased performance. Although she will go faster we find about 60kph is a nice comfortable cruising speed. Fuel consumption, once over the range has come it at 52mpg - about 15km per litre. Fuel is not going to be a big expense and the 20 litre tank should get us easily between stops.

Cooktown has been great with lots of interest and an interview by the local paper who were fully  expecting us - how we do not know. As the Austin 7 in 1928 was the first car ever to drive to Cooktown their interest is keen.

Tomorrow on the Battle Camp Road and our first dirt to Laura.